“Life starts all over again when it gets crisp in the fall.” – F. Scott Fitzgerald

There are a lot of great books to look forward to in the next few months, and while it was not a simple task I did narrow it down to the top six I am most excited to get my hands on. In no particular order, here are the top six books on my fall reading list: 🙂

“When Felix is deposed as artistic director of the Makeshiweg Theatre Festival by his devious assistant and longtime enemy, his production of The Tempest is canceled and he is heartbroken. Reduced to a life of exile in rural southern Ontario—accompanied only by his fantasy daughter, Miranda, who died twelve years ago—Felix devises a plan for retribution.”

Certain Dark Things by Silvia Moreno-Garcia (October 25th)
Silvia Moreno-Garcia is the author of one of my absolute favourite books of 2015, Signal to Noise so anything she releases is a must-read for me. Her new book is described as a YA paranormal thriller where “vampires, humans, cops, and gangsters collide in the dark streets of Mexico City.”

The Sun Is Also a Star by Nicola Yoon (November 1st)
“The Universe: Every moment in our lives has brought us to this single moment. A million futures lie before us. Which one will come true?”

This is the new release from the author of Everything, Everything. It is a novel about fate, which tells the story of Natasha and Daniel who meet under unusual circumstances. I very much enjoyed Nicola Yoon’s debut novel and look forward to reading more of her work. 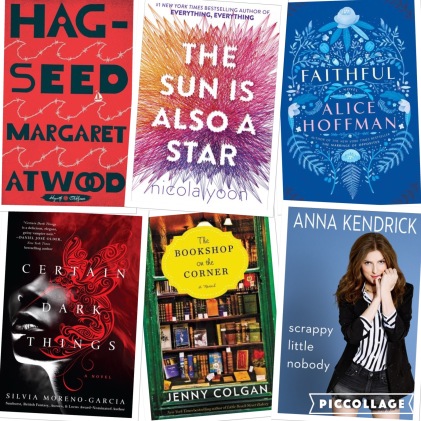 The Bookshop on the Corner by Jenny Colgan (September 20th)
“Nina Redmond is a literary matchmaker. Pairing a reader with that perfect book is her passion… and also her job. Or at least it was. Until yesterday, she was a librarian in the hectic city. But now the job she loved is no more.

Determined to make a new life for herself, Nina moves to a sleepy village many miles away. There she buys a van and transforms it into a bookmobile—a mobile bookshop that she drives from neighborhood to neighborhood, changing one life after another with the power of storytelling.”

A book about books. Enough said.

Faithful by Alice Hoffman (November 1st)
Described as “a soul-searching story about a young woman struggling to redefine herself and the power of love, family, and fate.” It follows a girl named Shelby whose life is changed after a tragedy that destroys the future of her best friend but she is able to walk away. Sounds like a very powerful novel.

Scrappy Little Nobody by Anna Kendrick (November 15th)
A collection of essays from the oh so funny, Anna Kendrick. Yes, please!

“I’m excited to publish my first book, and because I get uncomfortable when people have high expectations, I’d like to use this opportunity to showcase my ineptitude, pettiness, and the frequency with which I embarrass myself. And while many of my female inspirations who have become authors are incredibly well-educated and accomplished comedy writers, I’m very, very funny on Twitter, according to Buzzfeed and my mom, so I feel like this is a great idea. Quick question: are run-on sentences still frowned upon? Wait, is ending a sentence with a preposition still frowned upon? I mean, upon frowned? Dammit!” —Anna Kendrick