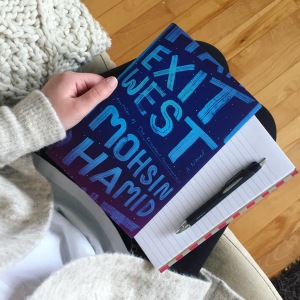 “In a city swollen by refugees but still mostly at peace, or at least not yet openly at war, a young man met a young woman in a classroom and did not speak to her.”

As war and unrest is slowly taking over their country, Saeed and Nadia meet in a night class, each equally drawn to the other. They strike up a friendship that leads to romance, and as the situation in their country becomes more and more perilous, they begin to seek a way out. Amid rumours of secret doors that lead to places far away they decide to take a chance on an uncertain future, as their reality becomes one of danger and desperation.

“Rumour had begun to circulate of doors that could take you elsewhere, often to places far away, well removed from this death trap of a country. Some people claimed to know people who knew people, who had been through such doors. A normal door, they said, could become a special door, and it could happen without warning, to any door at all. Most people thought these rumours to be nonsense, the superstitions of the feeble-minded. But most people began to gaze at their own doors a little differently nonetheless.” 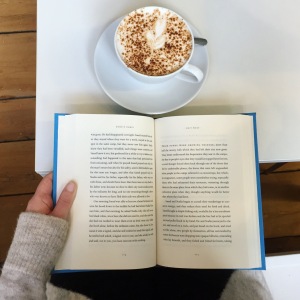 Exit West is a novel that both surprised and greatly impressed me. I came across it by chance and was quite taken by its premise. As I read through the story it delivered on so many levels, the main one being the way in which it captures the reality and emotions of those caught up in conflict situations; the desperation, despair, fear, and the loss of humanity.

“What she was doing… was for her not about frivolity, it was about the essential, about being human, living as a human being, reminding oneself of what one was, and so it mattered, and if necessary was worth a fight.”

In the midst of everything we have our two main characters and the subtle yet significant ways their circumstances and journey affect them as individuals, and in turn their relationship. There is a slight fantasy element to the novel in the idea of doors that lead to a different and far away place, which is subtle and adds a charming element to the overall story. A beautiful and thought-provoking novel.

“… decency on this occasion won out, and bravery, for courage is demanded not to attack when afraid.”