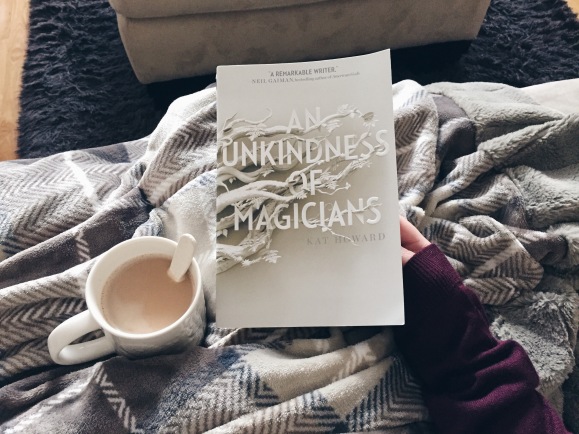 “Magic, at its heart, starts with sacrifice. You have to give up something to get something, and because magic is big, with all that it allows you access to, what you give up has to be big. It has to be meaningful.”

Within New York City lies a world of magic, the Unseen World. It is open only to those with magical ability, but the degree of that ability varies from person to person. Every twenty years this magical world must participate in the Turning— a series of duels between established Houses, their champions and various challengers, with the winner gaining control of the Unseen World. However, the Turning has arrived early this time around and there is something strange happening in the Unseen World; the magic is weakening. Sydney has seemingly come out of nowhere and proven herself as a force to be reckoned with. She is one of the few people who know what is occurring and why, and is intent on winning control in order to destroy the existing system.

I must admit I do have a weakness for books about magic, and as a result An Unkindness of Magicians became a must read for me as soon as I came across it. There is always such a fond feeling of nostalgia that comes with it and I am more than happy to explore new magical worlds. I ended up enjoying this novel, which had an interesting magic system and combined with the competition aspect of the Turning, it was quite compelling. The magic in this world is not pretty or whimsical, but is in fact really dark. I found this to be an intriguing take, and appreciated the discussions it brought up regarding the price of magic and what people are willing to do in order to make their own lives easier. The novel is really fast-paced, which I both liked and at times didn’t like so much. I liked that it did not drag things out, but at times it felt like events play out too quickly, leaving no room for suspense. And as a result it is difficult to have a connection to the characters. I also found the layout of the dialogue somewhat confusing, and more than a few times I had to re-read sections in order to be sure who was saying what. Overall, An Unkindness of Magicians is an enjoyable read, and if you are a fan of magic and stories with a dark twist, add this to your reading list.