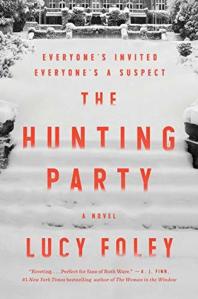 “All of them are friends. One of them is a killer.”

A few days at an idyllic and isolated estate in the Scottish Highlands sounds like a great way to welcome the New Year. At least that is what it seemed like to a group of old college friends who had developed a tradition of getting together during that time of the year. Now that their lives have gone in different directions it has become the one time that they can all be together as a group. But fairly soon upon arrival it becomes clear that long held resentments are creeping up to the surface and that their friendship may have reached an expiry date, or maybe they were never quite friends at all.

“Some people, given just the right amount of pressure, taken out of their usual, comfortable environments, don’t need much encouragement at all to become monsters. And sometimes you just get a strong sense about people, and you can’t explain it; you simply know it, in some deeper part of yourself.”

As a fan of closed circle mysteries, the premise for The Hunting Party is one I am very much drawn to. And in anticipation of the author’s upcoming book, The Guest List, I had to give this one a go. Unfortunately it did not end up working for me at all. The story is told through multiple perspectives and jumps back and forth in time, from the moment of arrival and present day, gradually making its way to the reveal. The format itself is fine but I don’t know if it was the best choice here. There are many characters (arguably too many) but we get the point of view of five of them: two in present day, and three from two days prior to the murder. Considering it is a story about a group of friends, this felt off to me, and as a result there are many characters that feel one-dimensional and completely forgettable. I feel that having less characters and all of their points of view presented would have worked much better, adding to the suspense.

Minus the two employees of the lodge, the characters are quite unlikeable. This is not a flaw for me generally, but in this case it made me extremely disinterested. The majority of the book consists of these characters reminiscing about the past and we get little hints of rivalries, resentments and dark secrets. It did not draw me in whatsoever. Perhaps it is because the characters are telling their story directly to the reader that did not click for me. It just leads to a discrepancy between the tone of the storytelling and the story itself, particularly when the murderer is revealed. The whole wrap up is underwhelming, but I was fairly checked out by that point and simply was not at all invested in the outcome. It is fair to say that it was not any one thing that made this a disappointing read, but more of a combination of a few different things that left me with an overall feeling of disinterest.

Diving into the world of Dickens this winter and enjoying every minute of it.🥰
I don’t know about you but I’m ready for fall.🍁😊
two beautiful books💕
I don’t reread books very often but these two have become my absolute favourites to revisit.🥰

Diving into the world of Dickens this winter and enjoying every minute of it.🥰
I don’t know about you but I’m ready for fall.🍁😊
two beautiful books💕
I don’t reread books very often but these two have become my absolute favourites to revisit.🥰
Current reads!💕
A gorgeous novel.💕
Loading Comments...
%d bloggers like this: