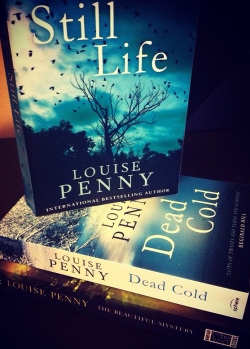 The Chief Inspector Gamache Mystery Series is based around Armand Gamache, the Chief Inspector of Homicide of the Sûreté du Québec.  It follows him and his partner Jean Guy along with a variety of characters of a small fictional Quebec village called Three Pines.  The novels are well-written, suspenseful, and I have been a big fan ever since I stumbled across the eight book in the series, The Beautiful Mystery a couple of years ago.  Soon after, I had read each book and have continued to follow the series ever since.  Some books I enjoyed a lot, others a little less, and a couple not so much.  Here is my ranking of the books in the series, from my favourite to least favourite.  (no spoilers)

1. Still Life
My favourite book is also the first one in the series.  Still Life introduces us to Chief Inspector Gamache who is called in to investigate a suspicious death in the village of Three Pines.  It is a great introduction to the series and along with getting to know all the characters, the investigation of a very mysterious death makes for a great read.

2. Dead Cold
Also published under the title A Fatal Grace, Dead Cold is the second book in the series.  Back in Three Pines, Gamache investigates the death of a woman who appears to have been electrocuted in the middle of a curling match.  We get to learn more about the village, its inhabitants, and the mystery is a puzzling one.

3. The Beautiful Mystery
While this is the eighth book in the series, it was the first one I read.  It caught my eye at a bookstore and I decided to give it a try, not knowing that it was part of a series.  Unlike the other books, this one does not have any connection to Three Pines and is instead set in a monastery where outsiders are not permitted.  After the choir director there is murdered, Gamache is called to investigate.  It is an interesting and very well-researched read.

4. The Cruelest Month
A villager in Three Pines appears to have been scared to death at a seance.  Suspicious, mysterious, intriguing and very enjoyable.  This is the third book in the series and I liked it very much.

5. A Trick of the Light
A former acquaintance of Clara (one of the key characters in Three Pines) is found dead in her garden.  The seventh book in the series gives more insight into Clara and her artistry.  I liked this aspect of the book and the mystery kept me guessing until the end.

6. The Long Way Home
The tenth book is quite an adventure and takes us to some interesting locations as Gamache joins Clara on the search for her husband Peter.   I particularly liked this book as an ongoing arc in the series came to an end in the book previous, and The Long Way Home signified a new direction for the series.  Although I found the ending itself quite frustrating, it was a strong story.

7. The Murder Stone
In the fifth book, Inspector Gamache and his wife are celebrating their anniversary at a secluded Manor, when a death occurs at a family reunion.  This focused more on the family history and dysfunction rather than the mystery itself, and there were times when I was a little confused.  It was the first book in the series that I was disappointed with but it still held my attention.

8. The Nature of the Beast
The eleventh and most recent release, follows the events after a shocking discovery in the woods of Three Pines.  I enjoyed this one but it did give a glimpse into where the series may go from here and I’m not particularly excited about it.

9. How the Light Gets In
In the ninth book, there are two main points of focus: a disappearance in Three Pines as well as the continuation/conclusion of the conflict within Gamache’s department.  The sub-plot of the departmental issues is one that is a part of quite a few of the novels and it’s a part that I was never a big fan of and much prefer the stories surrounding the village.  I did enjoy its final conclusion.

10. Bury Your Dead
This book had a big focus on the departmental conflicts that I was not a fan of and also dealt with some loose ends from the previous book, which was The Brutal Telling and as you can see, my least favourite.  It did end up to be a very engaging read but it just consisted of too many aspects that had not appealed to me.

11. The Brutal Telling
A body is found in the bistro in Three Pines and the story that unfolds is one that reveals a great deal about one of its inhabitants.  It felt like the story did not have a clear direction and the ending was unsatisfactory.  I’m not sure if I would like this book a little more on a re-read but at the time I was quite disappointed with this one.

If you are interested in this series, I definitely recommend reading the books in order.  Most can be read as a stand-alone, however each book does make references to previous occurrences or people that appeared in the earlier ones.  Also, because book six is in part a continuation of book five, those are best read in the correct order.  If you are only going to read one, my pick would be Still Life.  It continues to be my favourite and is a great introduction to the series as a whole.

‘tis the season for cozy reading.💕
Looks like it will be a year of big books for me. I have really enjoyed taking my time and exploring longer stories. Currently I’m reading The Way We Live Now by Anthony Trollope and am enjoying it so much. Very eager to see where everything will lead and how it will all conclude but trying to pace myself.🙃 Other big books on my reading list for this year are:
With the first day of summer bring on all the summer reads!☀️ (thank you @berkleypub for this copy!)
Gus may not seem impressed but I am sure he would love The Master and Margarita as much as I did.

‘tis the season for cozy reading.💕
Looks like it will be a year of big books for me. I have really enjoyed taking my time and exploring longer stories. Currently I’m reading The Way We Live Now by Anthony Trollope and am enjoying it so much. Very eager to see where everything will lead and how it will all conclude but trying to pace myself.🙃 Other big books on my reading list for this year are:
With the first day of summer bring on all the summer reads!☀️ (thank you @berkleypub for this copy!)
Gus may not seem impressed but I am sure he would love The Master and Margarita as much as I did.
My reading mood has led me to classics and I have thoroughly enjoyed diving into research mode to put together a ridiculously long TBR.📚 Outside of school, I haven’t read many classics so it is a whole new world. I knew for sure that I wanted to give the much loved Jane Austen a read, and after looking into her published works I thought “hmmm, why not read them all??” Yep, I’m all in.😄
My reading mood has led me on a classics journey and I have been in full research mode building my TBR.📚 I am so excited about so many books! First up is The Master and Margarita by Mikhail Bulgakov, which sounds so wonderfully bizarre, taking place over a span of a few summer days in Moscow when the city is visited by the Devil along with his entourage that includes a giant talking cat. Consider me intrigued.😄
Loading Comments...
%d bloggers like this: