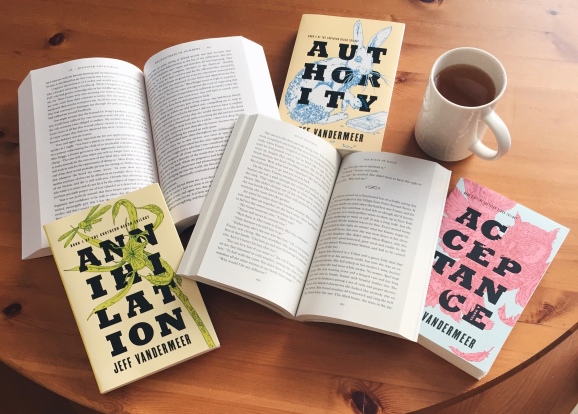 “That’s how the madness of the world tries to colonize you: from the outside in, forcing you to live in its reality.”

The Southern Reach Trilogy is a science-fiction trio of books that consists of Annihilation, Authority, and Acceptance, which revolve around the mystery of Area X. This is a zone that has been cut off from civilization and numerous expeditions have been sent in order to uncover just what is happening in Area X and why. The first expedition returned successfully with reports of a pristine landscape, members of the second expedition all committed suicide, while members of the third expedition turned against each other and died in a fury of gunfire.

Annihilation is the story of the twelfth expedition, consisting of four women: a psychologist, an anthropologist, a surveyor, and a biologist who is also our narrator. Upon their arrival they discover a topographical anomaly, unexplainable creatures, and many hidden secrets.

Acceptance takes us back to Area X, told through different perspectives, it concludes the trilogy in its search for answers.

The Southern Reach trilogy is strange, creepy, and just plain bizarre. Annihilation completely captured my attention and imagination, and I simply could not put it down. The author truly brings the images to life and I couldn’t help but be swept up in the mystery of Area X. Unfortunately the following two books, Authority and Acceptance do not live up to the first and at a certain point become a tedious journey to reach the conclusion. I feel that this is largely due to book length, as Annihilation comes in just under 200 pages, while both Authority and Acceptance are each well over 300 pages. As a result there is simply much too much added detail, which feels unnecessary, tiresome and diminishes what had the potential to be a great overall trilogy. If you are a fan of science-fiction and weird, and I mean WEIRD books, then I would highly recommend Annihilation, which to me works well enough as a stand alone novel.

I don’t know about you but I’m ready for fall.🍁😊
two beautiful books💕
I don’t reread books very often but these two have become my absolute favourites to revisit.🥰
Current reads!💕

I don’t know about you but I’m ready for fall.🍁😊
two beautiful books💕
I don’t reread books very often but these two have become my absolute favourites to revisit.🥰
Current reads!💕
A gorgeous novel.💕
Halfway through my E. M. Forster journey and looking forward to reading the rest of his novels this year.💕 So far, Howard’s End is my absolute favourite. Just wonderful.
Loading Comments...
%d bloggers like this: